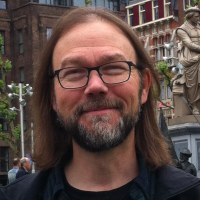 My career has primarily been as a professional software engineer employed in commercial, scientific, and academic contexts. For the past four years I have been working with the Monarch Initiative, an NIH-funded multi-institution project, as a bioinformatic software engineer; first at Oregon Health & Science University in Portland, and for the last couple years at Oregon State University in Corvallis.

My academic background has been primarily in Computer Science (BS at Northwestern University; MS and PhD at University of Oregon), but I’ve maintained a strong interest in linguistics and mathematics, and am very comfortable with these areas. I initially entered graduate school to explore the relations between syntax, semantics, computation, and structure.

My other interests are in developing technology to assist in both personal education via learner-motivated platforms, and in traditional education via schools. I’ve built an open source technology called Smartdown (https://smartdown.io), which is a framework-neutral (i.e., no React or Vue dependency) Javascript library designed for authors, teachers, and students to more easily create and publish explorable explanations.

A picture of me (admittedly, not a recent picture)